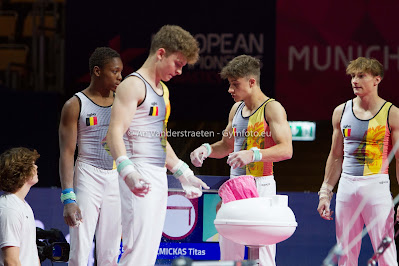 Today the juniors completed their team-and all-aroundcompetition at the European championships in Munich. The young Belgian junior team competed in the first subdivision and finished on the 16th place.  The Belgian team started it's competition well on floor. Fynn Van Kampen was the first gymnast to compete. He scored 12.466. Giel Vandeberg was a bit unprecise in his receptions and scored 12.066. Cyril Baudoin added 12.333 to the team total. He went out of bounds on his first tumble pas: a front twist followed by a double front summersault. Victor Tournicourt  was pretty solid and scored 13.133. On pommel horse the team completed 3 routines without major mistakes. Kyano Schepers scored 12.066 on his first apparatus. Victor and Giel both   added 12.166 to the team total. On rings, the oldest teammember Cyril received the highest score for the team: 12.833. Giel scored 12.433 and Fynn 12.200.  On vault Victor received the highest score: he received a 13.733 for his tsukahara with d
Enregistrer un commentaire
Lire la suite 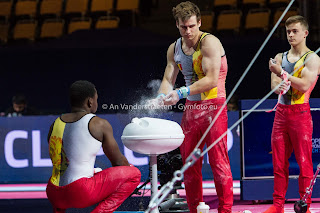 Today was the first day of competition for our Senior gymnasts at the 2022 European Championships in Munich. Today served as qualifier for Saturday's team final and Sunday's event finals. Our Senior team was represented by twins Nicola and Glen Cuyle , Luka Van den Keybus , Noah Kuavita and Takumi Onoshima . Onoshima is the last minute replacement after Victor Martinez sustained an injury during podium training. Their goal today is to place in the top 13 and qualify for the World Championships in Liverpool. They started on floor, where Takumi got the highest score for the team with a 13,866. Nicola and Glen had good routines with no major mistakes to score 12,733 and 12,100 respectively, while Luka had to count a fall (12,500). Pommel horse has not always been on Belgium's side in the past and today wasn't an exception. Noah had the best result with a 13,233. Luka had multiple mistakes and only got a 10,900. Nicola was clean overall (12,900), while Takumi didn't
Enregistrer un commentaire
Lire la suite 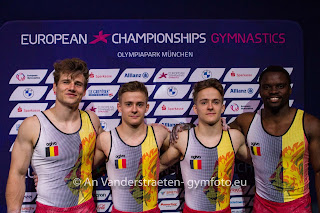 From 18th to 21st of August, Munich (Germany) will host the Men's Artistic Gymnastics Championships for both Juniors and Seniors gymnasts, one week after the Women's competition. Our country is sending both a Junior and a Senior team. The junior team is composed of   Cyril Bauduin ,  Kyano Schepers ,  Victor Tournicourt ,  Fynn Van Kampen and  G iel Vandeberg . Kyano, Giel and Cyril recently competed at the European Youth Olympic Festival, where they placed 20th as a team. They will try to improve that finish and reach the top 12. For most, it is the first major competition after two years of Covid. Belgium will rely on experienced senior gymnasts in Munich, with twins Nicola and Glen Cuyle , Noah Kuavita and Luka Van den Keybus . Late addition to the team, Takumi Onoshima will replace Victor Martinez , who sustained a back injury during podium training yesterday. Onoshima will have to compete without having the chance to have tested the competition apparatuses beforehan
Enregistrer un commentaire
Lire la suite 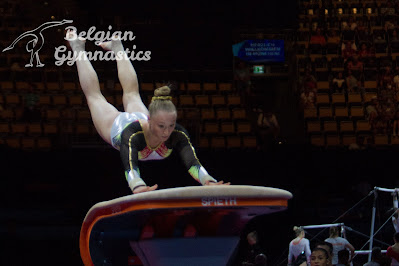 Today was the last day of women's competition at the European Championships in Munich. Lisa Vaelen qualified for the vault final and finished 4th. Lisa was the last gymnast to compete in a vault final plagued with injuries. Both Asia D'Amato and Valentina Georgieva went down and needed medical treament. This resulted in a quite long delay and extra warming up time for the three last gymnast to go.  Zsofia Kovacs from Hungary won the gold medal with a score of 13,933. She performed a neat double twisting yourchenko and a handspring front layout with half twist. Asia D'Amato won the silver medal, despite her injury with a score of 13,716. Aline Friess performed exaclty the same vault as our Belgian Lisa Vaelen: a handspring followed by a summersault with one and a half twist and a yourchenko with full twist. Aline scored 0.016 more than Lisa Vaelen. Results Vault final: 1. Zsofia Kovacs (HUN) 13,933 2. Asia D'Amato (ITA) 13,716 3. Aline Friess (FRA) 13,599 4. Lisa Vaelen
Enregistrer un commentaire
Lire la suite

2022 European Championships: 5th place for Belgium in the team final 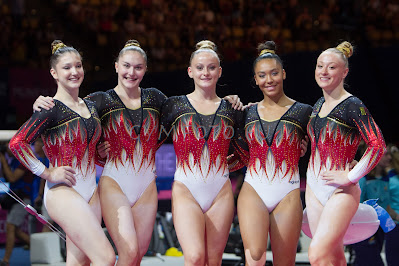 Today the European team champions were crowned. Team Belgium, represented by Lisa Vaelen, Noémie Louon, Fien Enghels, Jutta Verkest and Maellyse Brassart qualified in 5th place. The Belgian team started its competition on balance beam together with the team from the Netherlands. Noémie Louon opened the game with a routine including a solid layout mount, a backhandspring lay out step out and a free walkover. She scored 12,833. Next up was Lisa Vaelen who had little checks here and a fall on her front tuck. She also performed a backhandspring back tuck combination, a double spin and a double twist dismount. She scored 11,833. Jutta Verkest was the last Belgian to compete on balance beam. With just a little wobble on her switch ring leap, she added 12,933 to the team total. On floor Jutta was the first one to go. She performed playfully and showed a nice switch ring leap and a double pike but had some troubles on the landings (12,300). Maellyse Brassart was next up. She showed a full
Enregistrer un commentaire
Lire la suite 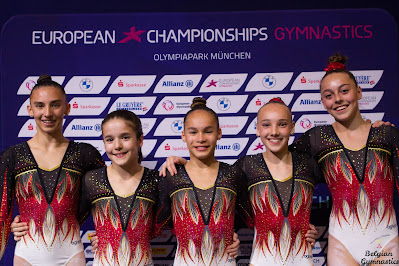 After a thrilling first day of competition for the Seniors, today was the Juniors' turn to shine! Today's competition served as the team and all-around finals and the qualifiers for the event finals on Sunday. Eva Bruynseels ,  Hanne Degryse ,  Naomi Descamps ,  Yelena Devreker  and  Aberdeen O'Driscoll represented Team Belgium at these Juniors European Championships. This is a very young team. All girls, but O'Driscoll, are born in 2008 and are first year juniors. Bruynseels, Degryse and Devreker gained some international experience at the last EYOF.  They started their competition on beam. Naomi had a difficult start but Hanne and Yelena recovered well with 11.800 for both. Aberdeen received the heighest score on balance beam with 11,866.  On floor the girls impressed with their bright choreographies. Eva scored 10,900. Hanne entertained the judges and showed a high double pike. She scored 11,800. Yelena performed gracefully and received a score of 12.066. It was onc
Enregistrer un commentaire
Lire la suite 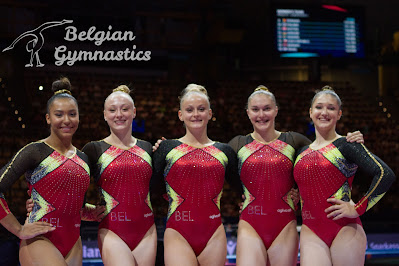 Today the Seniors took the floor in the legendary Olympiahalle in Munich. They competed in the team's qualifications, that also served as qualifiers for event finals and to crown the all-around European champion. Team Belgium was represented by Lisa Vaelen , Noémie Louon , Maellyse Brassart , Fien Enghels and Jutta Verkest.   Noémie Louon  was the first to compete on uneven bars. She scored 12,933 for a clean routine. Up next was Maellyse with a clean piked Jaeger and a good landing (13,133). Lisa had a break on her pak salto but the rest was clean, to score 13,500. Fien was the last to go on bars for Belgium, her best event, and could pretend at a place in final, but she unfortunately fell on her double front dismount (12,600). On beam, Noémie was solid, with a backhandspring layout step out, double wolf turn, a free cartwheel and a one and a half twist dismount (12,933). Same score for Lisa, while Jutta got 13.000. She competed a backhandspring layout step out, a free walkover,
Enregistrer un commentaire
Lire la suite
Autres articles