Combs-la-Ville: great results from our gymnasts!

This week-end, 8 gymnasts competed at the Tournoi International de Combs-la-Ville! For most of them, it was the very first international competition. 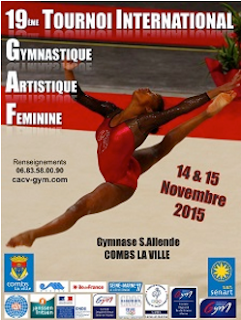 On Saturday, the Espoirs gymnasts competed in the team and all-around finals.

Individually, also in the Espoirs category, Switzerland shone again as two of its gymnasts won gold and silver.

In the Juniors ranks, Rinke Santy only competed on uneven bars, where she scored 13.000. French gymnast Mélissa Poitreau won the all-around title (53.133) ahead of Czech Aneta Holasova (52.633) and another French gymnast, Leanne Bourgeois (52.083).

On Sunday, two gymnasts of the Espoirs category also competed in the event finals. Amy Lejeune won a bronze medal on vault with 12.550. Manon Muller placed 4th in the uneven bars final (12.100).