In the space of a year and a half, Nina Derwael won two European title, a World bronze medal and a World title! In the final today, she was untouchable and won the gold with 15.200. 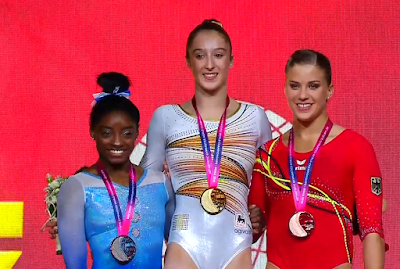 Amazing, unreal, historical, unbelievable. There are not enough words in the world to describe what Nina Derwael achieved today.

Heavy favorite for the uneven bars gold, the title was hers to lose. But she delivered under the pressure, once again. The last time Nina missed a uneven bars routine in competition was at the European Championships qualifications in 2016. Not only has she become one of the best bars workers in the world, she's only one of the most consistent.

Today, she made history once again. She became the first Belgian gymnast, male or female, to win a World Championship title EVER. Her bronze medal last year was the first medal for a Belgian female gymnast, and the first medal for Belgium in more than a hundred years. Her result back then was already historical. But today's performance was even more.

History was made in the other finals too. Simone Biles won her very first World Championships vault title, making that her 13th World gold medals overall. This is more than any gymnast, male or female. She scored 15.366 and placed ahead of Shallon Olsen from Canada (14.516) and Mexico's Alexa Moreno (14.508), who won the first world medal for her country.

On the men's side, Carlos Edriel Yulo from the Philippines won a historic bronze medal on floor for his country with 14.600. Russia's Artur Dalaloyan won the title (14.900) ahead of Kenzo Shirai (Japan, 14.866).

Xiao Ruoteng (China) and Max Whitlock (Great Britain) tied for first on the pommel horse final with 15.166. Xiao already lost a tie break in the all-around final, when he tied for first with Dalaloyan. That day, he had to leave the arena with the silver. But not today. Thanks to a cleaner execution, he got away with the gold medal. Taipei's Lee Chih Kai got the bronze (14.966). It's only the scond medal for Taipei after a bronze on vault at the 1993 World Championships.

On rings, Eleftherios Petrounias once again won the gold medal. The Greek is the undisputed Lord of the Rings and has not been defeated since 2015. Today, he scored 15.366. Brazil's Arthur Zanetti, the 2012 Olympic Champion on that event, got the silver medal (15.100) and Italy's Marco Lodadio earned the bronze (14.900).

Tomorrow will be the final day of competition in Doha. Nina Derwael will be in the balance beam final around 14:30 !