These past few weeks have been busy so far for our gymnasts and it's not over yet! Our Juniors WAG team will compete in Marseille next weekend and then in Charleroi at the Top Gym. But both our MAG and WAG teams have been successful so far. Let's catch up!

The 13th edition of the Wase Gym Cup took place on the last weekend of October and gathered some of Belgium's best gymnasts and athletes from the United Kingdom and the Netherlands. Senior's Jonas Baert has been pretty successful as he won 6 gold medals (AA, team, floor, vault, parallel bars and horizontal bar). In the all-around, he took the gold ahead of European Championships finalist Noah Kuavita and Yureck Van Eetveld.

In the Youth category, Bram De Ridder won the all-around ahead of Glen Cuyle and Jordi Hagenaar from the Netherlands. De Ridder, Cuyle, Abel Stoop and Nicola Cuyle won the team gold.

On the Women's side, Naomi Visser from the Netherlands won gold in the all-around ahead of her teammates Mandy Magoub and Mirte De Reiger. Magoub and De Reiger also won gold with their team, while Visser took the bronze. The GymFed team (De Neef, Vanneste, Bertrandt and Louon) took home the silver. Visser then took two more golds on bars and floor, De Reiger winning vault and Wendy De Jong (NED) taking gold on beam. De Neef won silver on bars, Vanneste won silver on floor.

The Netherlands' Yu Verburg won the all-around title in the Youth category ahead of Merel Pouw (NED) and Belgium's Muka Amerlinck. The team from Wevelgem won the team gold ahead Amsterdam and Heerenveen.

On Friday November 4th, our Juniors team travelled to Switzerland for a friendly meet against teams from Switzerland, Italy and The Netherlands. This meet is a step towards the 2017 European Youth Olympic Festival (Hungary, July 2017). The Belgian team, composed of Jonas Delvael, Liam De Smet, Mathis Bouchet and Noah Kuavita took home the bronze. The home team, Switzerland, won the gold, ahead of Italy and our boys. Individually, Italy's Nicolo Mozzato won the all-around ahead of his teammates Giannini Lay and Lorenzo Casali. Jonas Delvael and Noah Kuavita placed 6th and 7th respectively. Mattis ranked 11th (5 apparatuses) and Liam was 19th (3 events). 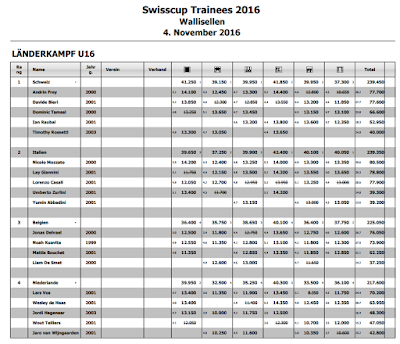 On Saturday, Barcelona hosted the 38th edition of the Memorial Joaquim Blume. Nina Derwael and Jimmy Verbaeys made the trip to Spain to represent our country. The meet has been pretty successful for Nina Derwael who had a clean meet to win the gold medal with a total of 56.150! She placed 1st ahead of France's Melanie De Jesus Dos Santos and Russia's Seda Tutkhalian.

Jimmy Verbaeys, on the other hand, had a pretty rough meet, breaking one of his grips during a routine. He scored a total of 75.300 for a 12th place finish.

This weekend, Combs-La-Ville was also hosting its traditional international tournament. Luna Cassart, Sophia Kola and Chloé Storey represented Belgium in the Juniors category. In a competition clearly dominated by Italy (113.100), our girls placed 8th as a team with a total score of 95.900. Individually, Sophia Kola got the best result among the Belgians, with a 17th place finish and a total score of 49.100. Luna Cassart placed 33rd and Chloé Storey was 38th.

The next big competition for our gymnasts will be the Elite Gym Massilia (November 11-13). Margaux Daveloose, Julie Vandamme, Manon Muller and Rinke Santy will represent the GymFed. Cato Fleurackers, Chloé Storey, Sophia Kola and Luna Cassart will represent the FfG and Lisa Vaelen, Fien Vandeberg and Margo Van Linden will be there for their club, De Gympies Keerbergen.
Publié par Florence Lestienne à 17:11