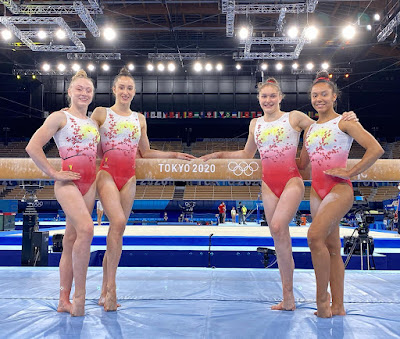 The main goal for the team is a top 8 finish and a qualification for the Team Final. All 4 gymnasts will have to perform at the top of their abilities to obtain that goal but it's not impossible. They will compete in the last subdivision alongside the team of Germany and 2 mixed groups. In Rio 2016 they competed in the first subdivision. Team Belgium will start the competition on floor at 13:20 Belgian time and will be live on Sporza and Tipik (RTBF).

The girls will also try to qualify for the All-around final that gathers the 24 best gymnasts with a maximum of 2 per country. All 4 Belgian gymnasts can qualify for the final. All will depend on their performance during the qualifications.

Off course all eyes will be on Nina Derwael on uneven bars. As the reigning World Champion, she's one of the favourites for the gold medal. She nevertheless still has to qualify for the final. Normally that shouldn't be a problem. Nina is confident and ready to deliver. She's also seen as a possible qualifier for the balance beam final.

Are you ready to support Team Belgium?!