This Tuesday was the women's team final at the 2020 Olympic Games in Tokyo, where, for the first time, Belgium competed. 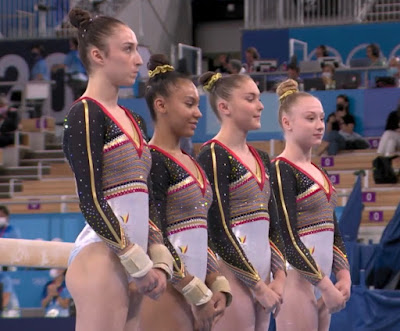 Nina Derwael started this final on beam for Team Belgium with an amazing routine (13.866). Things got a little bit more complicated for Jutta. She started her beam routine with a good layout step out and and an excellent flip to two layout step out, but she then lost her confidence and counted a few wobbles. She also had to take a deep step back on her dismount. She scored 12.200  Maellyse fell twice and got 10.933.

The ladies came back strongly on floor exercise. Jutta was first up, with her playfull choreography and nicely executed  tumbling passes (13.066). Nina was very expressive and solid and added 13.366 to the team total. Lisa's double arabian, full-in and double tuck were skyhigh. She scored 12.900.

On bars Lisa and Jutta had a few issues. Lisa hit the bar with her feet on her Jaeger and Jutta fell on her Shaposhnikova. Nina impressed again with yet another flawless routine. She scored 15.400, exactly the same score as her main contender for the uneven bars gold: Sunisa Lee.

Team Belgium scored 159.695 for the 8th place in this team final. They should nevertheless be very proud of what they accomplished by just reaching this final. Nobody can take this away from them.

With Simone Biles withdraing after the first rotation, the competition for the gold medal was exciting. The Russian foursome consisting of Angelina Melnikova, Vladislava Urazova, Viktoriia Listunova and Liliia Akhaimova was on fire and grabbed the opportunity to win the gold medal in this competition. The United States won the silver medal and Great Britain the bronze.

Next up: the women's all-around final on Thursday. The final starts at 12h50 Belgian time.
Be ready to support Nina Derwael and Jutta Verkest.
Publié par An Vanderstraeten à 16:27