Tuesday october 19, the Belgian men competed during the qualifications at the World Championships in Kitakyushu. Luka Van den Keybus and Noah Kuavita both qualified for the all-aroundfinal. 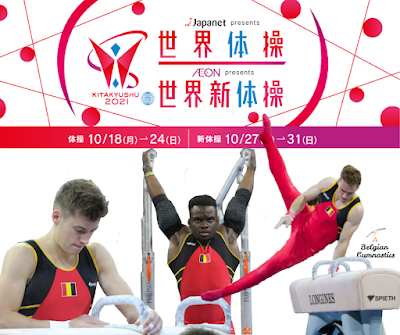 The Belgian men started their competition on still rings. Luka Van den Keybus scored 12.433 and Noah Kuavita 11.966. They both showed strong vaults. Luka scored 14.333 for his yourchenko with 2.5 twist and Noah 14.200 for his handspring double front. Luka was solid on parallel bars too and got 14.000 for his routine. Noah had some trouble and scored 11.300.

On high bar Maxime Gentges took the floor and scored 13.900 for a well controlled routine. Noah did even better and scored 14.066. He finishes on the 11th place on high bar. Luka added a 13.666 to his total.

After a long day of qualifications the Japanese Olympic champion Daiki Hashimoto was in the lead. Boheng Zhang from China and Adem Asil from Turkey are second and third.

On the women's side Angelina Melnikova from Russia finished on top of the field in front of the young Americans Leanne Wong and Kayla Di Cello. The Belgian women's team did not participate.

Thursday and Friday, the all-around finales are scheduled. The both start at 11.00 Belgian time. They are livestreamed on the youtube channel of FIG and on sporza.

You can find the full results here.