On Saturday 25 June, our National teams competed in Rotterdam, in a competition that served as the last Olympic trial before the Olympic team announcement.

On the Men's side, the Olympic spot went to Dennis Goossens. But on the women's side, a full team will be sent to Rio. In Rotterdam, the only criteria that could give you a spot on the team was to break the 56+ mark. But on Saturday, none of the gymnasts manged to do that.

There were still some mistakes here and here but nothing that can't be fix in time for Rio. Axelle Klinckaert impressed me with her recent upgrades. On vault, she now has a double twisting Yurchenko, which boosts her start value from 5.0 to 5.8. On beam, she added a standing Arabian, and a full twisting double layout on floor exercise. With 55.584, she was ranked 1st among the Belgians. She had a fall on beam and didn't had the best floor routine we've seen from her, but she has time to clean up a bit.

Right behind Klinckaert was Gaelle Mys (4th, 2nd Belgian, 55.326). Her best two events on Saturday were vault and beam, but she also had clean performances on bars and floor. I can't remember when is the last time I saw Gaelle have a mistake in a competition. Her consistency does certainly make her a great asset for the Games.

This day wasn't the best we've seen from Nina Derwael, who ranked 3rd among the Belgians. She started off really well on vault, but then had a fall on bars and a shaky routine on beam. She finished with a good floor exercise. If Nina can gain the confidence and the consistency she lacks for now, no doubt she can be a huge contender for a spot in the bars final in Rio. She can do it, she hit her bars in practice. There is no reason she can't do it in competition.

Cindy Vandenhole, on the other hand, had a really good day out there, especially on vault and bars, and she seems to have find the balance on floor that was preventing her to compete to her standards in the past. Same goes for Rune Hermans, who was clean and consistent. I even thought the scoring was a bit harsh on her beam routine, where she only had a big wobble on her double spin. She can score higher than what she got.

With two falls on vault and bars, Senna Deriks had a rough day in Rotterdam, and only scored 52.666, while Laura Waem got 37.350. She only competed on 3 events, but she had mistakes on all of them. She landed a bit short on her triple twist on floor, touched the floor with her feet on her pak salto on bars, and fell on her free cartwheel to back tuck connection on beam. We know she can do better than that, as she has proven that many times. Saturday was just a day to forget for Laura.

Finally, Julie Meyers had her shares of tiny errors that prevented her to show her full potential. She started really well on vault, posting the highest score for Belgium (14.200), but then had a mistake on beam and execution deductions on floor. Julie Croket, who has ankles issues, only competed on bars and beam. If she had clean routines overall, lower difficulty scores kept her in the shadow of her teammates. 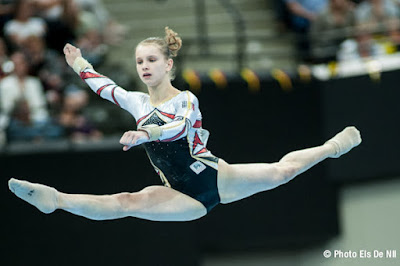 The Olympic team selection process is now over. In two days, on June 29th, se'll know which are the 5 gymnasts chosen to represent Belgium at the Olympic Games this summer. Those 5 gymnasts, as well as the 3 alternates, will then leave for Toulouse and a training camp, before competing in Germany as a last competition before heading off to Rio.