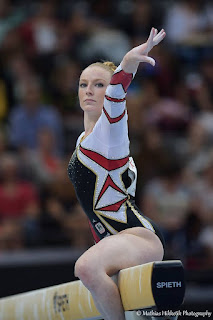 Gaelle is undoubtedly the leader of this team. The two-time Olympian will lead a rather young group to its first Olympic Games as a team. Gaelle's best event are balance beam and floor exercise, but she can definitely bring good scores on vault. her weakest event is bars. Multiple European finalist, Gaelle has the experience to lead the way to her teammates.

Laura is the second most experienced gymnast on this team. All-around finalist at Worlds, she can bring big scores on bars, her best event, but also on beam.


Axelle is one of the new comers but she's already one of the strongest gymnast Belgium ever had. She impressed the world with her fantastic tumblings on floor and her big difficulties on beam. She also has a double twisting Yurchenko, making her one of the contenders for a spot in the all-around final.

Nina is also a first year Senior but made a case for herself with a beautiful bars set, her great lines and her artistry on beam and floor. She can score really high on bars, and could pretend to a spot in the final in Rio, as well as a spot in the all-around final.

Probably the biggest surprise of the team, as many tought Rune Hermans would be in (myself included), but Senna can certainly help the team do great in Rio, especially on bars, where she is, along with Nina and Laura, one of our best gymnasts on that event. But she can also contribute on beam and floor, where she has lovely routines.

The alternate spot will be decided between Rune Hermans (Gym Haacht), Cindy Vandenhole (Vaste Vuist Lauwe) and Julie Meyers (TK PHH-Sta Paraat Hasselt). The girls will all go to Toulouse for a training camp on July 4th and a decision about the alternate spot should be made around July 15th..

On the Men's side, remember the Olympic ticket went to Dennis Goossens after he met one of the criteria set by the Federations.