On the last day of the women's competition, Belgium was under the spotlights as Nina Derwael and Axelle Klinckaert brought home three medals, including one gold, in what will remain a historical day for our country and for Belgian gymnastics. 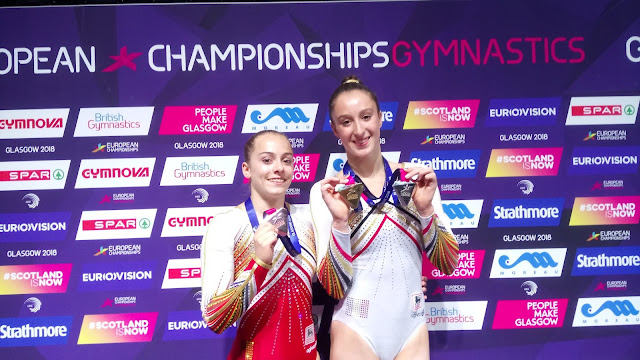 Historical ... We wrote this word many times before. But we'll have to use it once more, as there are no other words to describe what our girls achieved in Glasgow. In the very last day of the women's competition, it is not one, but three medals Nina Derwael and Axelle Klinckaert won for Belgium.

In the uneven bars qualifications, Nina let the nerve catch up to her, leading to uncharacteristic mistakes. But not this time. In final, she presented a great routine, full of difficulty and with good execution, to get 14.733. This score secured her the gold and her second consecutive European uneven bars title! Right after her was Jonna Adlerteg, from Sweden, who won her second uneven bars european medal, after the silver in 2013. In 3rd place was Angelina Melnikova from Russia, with 14.366.

Things were only getting started for Nina, as she moved on to beam. Already impressive in qualifications, she delivered once again one of the strongest routines we've seen from her, to get 13.600. If she doesn't have the difficulty, she certainly have the execution, earning a massive 8.600. She was only defeated by Olympic Champion Sanne Wevers, with a great 13.900. Marine Boyer earned her second medal of the championships. After the silver with her team, the French got the bronze on beam (13.166). Also in the beam final was Maellyse Brassart. Visibly nervous, the 17 years old placed 7th in her very first European final (12.266).

In a very competitive floor final, Axelle Klinckaert won a well-deserved bronze medal. After missing the Rio Olympics due to injury and then having to fight to come back to the highest level, this is such a pleasure to see Axelle shine on the biggest stage. Her floor routine was impressive and her choreography made quite an impression on the SSE Hydro Arena (13.400). France's Melanie De Jesus Dos Santos won her first European Championships title, with an impressive 13.766. Romania's Denisa Golgota won the silver (13.600).

On vault, Hungary's Boglarka Devai won the title, ahead of Angelina Melnikova and Denisa Golgota.

And let's not forget about Fien Enghels! Earlier today, our Junior also proved the younger ones were getting ready. She placed 5th in the balance beam final with 12.866

What the women's team has done here in Glasgow is simply incredible and ... historic. There were a lot of expectations and pressure on their shoulders, especially after the withdrawal for the team final. Today's performance proves that this decision, while difficult, was the best one to take. The main goal is the Tokyo Olympics, and it starts in 10 weeks at the Doha World Championships.

But in Glasgow, Nina, Axelle, Maellyse and Senna have already come a little bit closer to their dream.