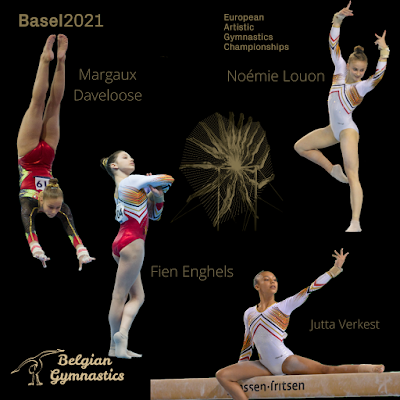 Margaux Daveloose and Jutta Verkest were the first two gymnasts competing on balance beam at this European Championships. This is never an easy task. Margaux managed to stay on the beam but had some wobbles and connection issues. She scored 11.700. Jutta fell twice but showed a beautiful backhandspring to two layout step out combination for 10.466. Noémie and Fien also started their competition on balance beam in the 3rd subdivision. Noémie fell twice at the very beginning of her routine but came back strongly and still scored 11.333. Fien missed a few connections and fell on her acro series. She got 11.733.

The girls came back strongly on floor exercise. Jutta scored 12.833 for a clean routine, Margaux got 12.866. Noémie showed great control on her first two tumble passes but unfortunately sat her last one down. The judges rewarded her with 11.966. Fien did not compete on floor.

On bars Margaux was clean but unfortunately fell on her double tuck dismount (11.833). Jutta was solid for a score of 12.933. Noémie scored 13.133 for a good routine including a piked Jaeger and a double pike dismount. Fien showed intricate work and dismounted with a skyhigh double front for a score of 13.900. She's the first reserve for the uneven bars final.

Jutta Verkest had the highest all-around total with 49.598. She finishes on the 33rd place and is the third reserve for the all-around final. The young gymnast told European Gymnastics she enjoyed the experience and was happy to come back from her nervewrecking start on balance beam. Jutta was closely followed by Noémie Louon who totalized 49.532 and Margaux Daveloose with 49.499.

In this first big competition in 13 to 15 months, the girls lacked competition rhythm. They all showed their ability to recover after a difficult start on beam. So let's see this competition as an important step in their preparation for the Olympic Games. They gained important experience today.