Today was the first day of qualifications at the European Championships in Cluj. Our boys took the stage and tried to qualify for the individual finals! Daan Kenis and Maxime Gentges both qualified for the all-around final.


Maxime Gentges and Jimmy Verbaeys were first up for Belgium on parallel bars. They both started off well, with just a little mistake for Jimmy in the beginning of the routine. Maxime scored 13.600 and Jimmy got 13.566. On horizontal bar, the two Belgians had a complicated rotation with heavy mistakes for both of them. Jimmy had to stop on the event and was too close to the bar on one of his releases. Maxime had a great routine until the dismount when he had to put his hands down. Jimmy scored 11.133 and Maxime got 12.133. 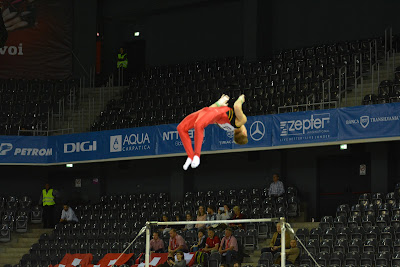 Mouving on to floor. Maxime stepped out of bounds but had a clean routine otherwise (13.066). Great routine for Jimmy Verbaeys with clean execution to score 13.700! On pommel horse, Jimmy had a clean routine until the dismount, when he touched the apparatus with his feet (12.700). Maxime hit his set, although it seemed a bit rough for him to reach handstand to dismount (13.600). It is a new routine for Maxime. 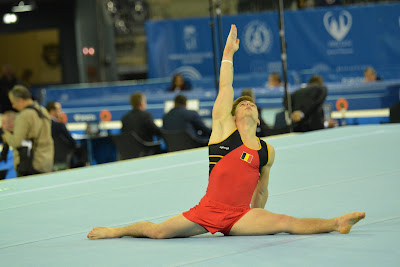 On rings, both Belgians had good routines, with nice execution and almost stuck landings on the dismount. Jimmy got 12.700 and Maxime scored 13.100. On their last event, the vault, Jimmy had a step on the landing but was clean otherwise (13.766). Maxime performed a new vault, a front handspring double front, but unfortunately sat it. Luckily, his feet touched the mat first or he would have received a 0. He got credit for it and scored 12.866.

On subdivision 2, Daan Kenis started for Team Belgium on pommel horse. A difficult start for him as he lost rhythm and had to stop in the middle of his routine. He finished strong and scored 12.700. On rings, Daan hit a good set but lacked the difficulty (13.000). Dennis Goossens made his debut in the competition on this event. Our Lord of the Rings received a 14.233 for his routine, which ended with a stuck dismount. Now, he has to wait to know if this will be enough for the final. 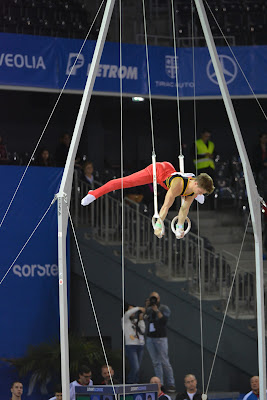 On vault, Daan hit his Yurchenko two and a half twist to score 14.066. On parallel bars, he had a mistake on his hands placement but the rest was good. Daan got 13.133.

On high bar, Kristof Schroé was the first Belgian to go. He unfortunately had a rough day, falling twice during his routine. He scored 10.900. Daan started off really well but fell on one of his releases too. He scored 12.633. 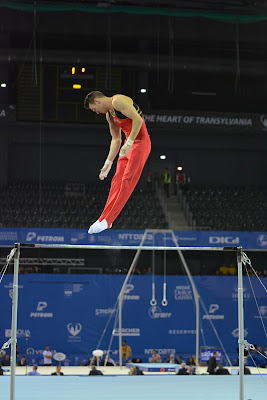 Daan finished his qualifications on floor exercise with a great routine to score 13.700 ! With a total score of 79.232, he ranked 19th in qualifications.

Maxime Gentges placed 24th while Jimmy Verbaeys placed 29th and will not advance to the final.